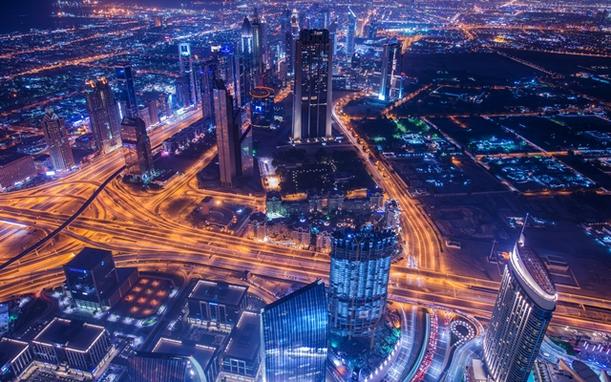 Changes in governance following the sale by Natixis of 29.5% of Coface’s capital to Arch Capital Group.Bernardo Sanchez Incera, new independent board member, appointed Chairman of the Board of Directors.

Unless otherwise indicated, change comparisons refer to the results as at 31 December 2019.

Nicolas Namias, Coface’s leaving Chairman, declared:
"I am happy that at the time when we sell the majority of our stake in Coface, the company is reporting very good results.
For more than 20 years, Natixis has supported Coface’s development. Today’s publication shows the strength and the good health of the business, at the opening of a new chapter of its history”. 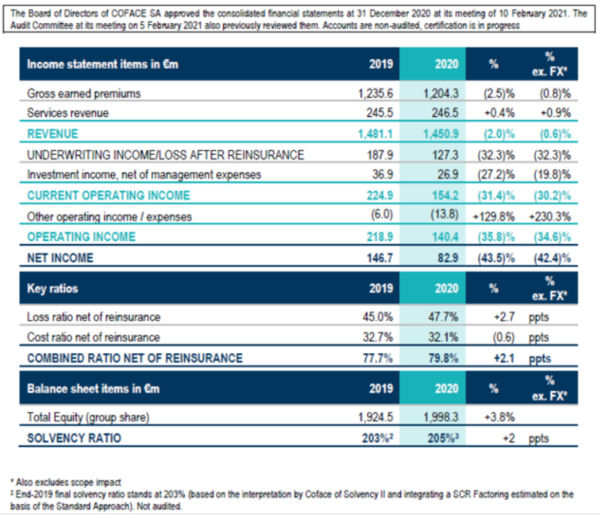 In 2020, Coface recorded a consolidated turnover of €1,450.9 million, down by -0.6% at constant FX and perimeter compared to 2019. On a reported basis (at current FX and perimeter), turnover was down by -2.0%, due to negative effects of currency movements.
Revenues from insurance activities (including bonding and Single Risk) declined by -0.8% at constant FX and perimeter (and by -2.5% at current FX), but grew during the final quarter of 2020. Client retention climbed to a new annual record level of 91.9%. New business stood at €138m, showing an increase over the previous year (€133m in 2019).

Coface’s client activity had a negative impact of -1.1% in 2020. This decrease is in line with an economic environment marked by successive lockdowns. The +1.4% rise in pricing confirms the upward reversal in the pricing cycle that began in the second quarter.
Revenues from other activities (factoring and services) rose by +0.9% compared with 2019. The growth in services and particularly information services (up by 11%) compensated for the fall in factoring revenues from Germany.

1 Also excludes scope impact
In the Northern Europe region, revenues declined by -4.7% at constant FX and perimeter (by -3.2% at current FX). Credit insurance business was affected by the significant drop in customer activities, while factoring income suffered from the decline in demand for corporate financing, in line with the economic slowdown.

In Western Europe, turnover declined by -0.9% at constant FX and perimeter. This was affected by the fall in credit insurance premiums (-1.6%) but partially offset by the positive performance of Single Risk and service activities.

In Central and Eastern Europe, turnover was down by -3.4% and by -2.8% at constant FX, mainly due to credit insurance affected by the decline in customer activity. As in Germany, factoring declined significantly due to lower economic activity.

In the Mediterranean and Africa, a region driven by Italy and Spain, sales grew by +0.2% and by +1.6% at constant FX. This rise was supported by strong client retention, positive pricing evolutions and growth in services.

In North America, revenues were slightly down, at -1.4%, on a reported basis but grew by +0.6% at constant FX, due to an increase in new business and an improvement in pricing conditions.

In Latin America, sales were down by -16.5% at current FX but grew by +3.7% at constant FX. Higher pricing compensated for lower client activity and new business (within the context of greater prudence on risks).

Revenues for the Asia-Pacific region rose by +1.6% at current FX and by +2.7% at constant FX. Higher pricing and positive net production compensated for weaker client activity.

(i)     Loss ratio
The gross loss ratio for 2020 was 51.8%, representing a rise of 8.4 ppts compared to the previous year. The gross loss ratio for Q4-2020 was 34.9%, showing a marked improvement compared to the previous quarter (54.8%).This improvement reflects the risk management measures taken by Coface since the start of the crisis, the mechanical drop in exposure during the confinement period and the significant support received by companies from most governments.
The Group’s reserving policy remains unchanged. Strict management of past claims enabled the Group to register 29.3 ppts of recoveries during the year.
The annual net loss ratio rose by 2.7% compared to 2019 (45.0%) to reach 47.7%. Excluding the impact of government schemes, the net loss ratio would have been 53.0%.

(ii)    Cost ratio
Coface is following its strict policy of cost management and is continuing to invest in improving its tools and transforming processes, in order to optimise operational efficiency. Over the year 2020, costs were down by -1.6% at constant FX and perimeter, and by -3.0% at current FX. The strict cost control policy is confirmed by the fact that the fall in costs is greater than the decline in revenues. The gross cost ratio was 33.7%, an improvement of 0.7 ppt year on year.

The cost ratio, net of reinsurance, was 32.1% in 2020, representing an improvement of -0.6 ppt over one year, thanks to strict cost controls. Excluding government schemes, the net cost ratio was 31.6%, as the commission rates attached to these plans were lower than the usual rate used in the private reinsurance market.

– Financial result
The net financial income for 2020 was €26.9m, down by €10m compared to the previous year. This amount includes realised capital gains of + €2.9m and an impairment charge on real estate funds (- €4.6m), within the context of falling values for commercial real estate.

The sharp reduction in the proportion of risky assets over the first part of the year resulted in a fall in the recurring portfolio yield (i.e. excluding capital gains, depreciation and currency effects), to reach €32.9m (compared to €44.6m in 2019). The accounting yield1, excluding capital gains, was 1.2% in 2020, down from the previous year (1.6%).

The strategy implemented by Coface consisted initially in protecting the value of the portfolio and strengthen liquidity levels in anticipation of higher claims payments. Since the third quarter, Coface has been gradually reinvesting its excess liquidity. At the end of the year, cash represented 15.8% of the investment portfolio.

– Operating income and net income
Operating income for the year was €154.2m, down by -31.4% compared to the previous year, mainly linked to the increase in the combined ratio and the decrease in net premiums due to higher cession rates within government schemes.
In 2020, Coface recorded positive goodwill (badwill2) of €8.9m following the integration of Coface GK in Norway and oneoff charges for an amount of - €13.8m. These include transaction costs, investment expenses and restructuring costs related to the Build to Lead strategic plan.
The effective tax rate was 37%, compared to 28% in 2019.
Total net income (Group share) fell by 43% to €82.9m, of which €30.5m was for Q4-2020.

The solvency ratio reaches 205%3, a 2 ppts increase. This ratio has been calculated using the partial internal model and the new factoring methodology. Excluding the impact of government schemes, the ratio would be 191%, a level well above the upper end of the target range (155%-175%).

Coface will propose the payment of a dividend4 of €0.55 per share to its Annual Shareholders Assembly, which corresponds to a distribution rate of 100%, in line with its capital management policy.

The start of 2021 is marked by renewed uncertainties around the coronavirus crisis. Just as the global vaccination campaign began, new, and often more contagious, variants of the virus began to appear. This means that tougher measures will be required to curb the spread of the virus, subsequently delaying an economic recovery. So far, the vaccines appear to be effective against these new variants.

Regions that are less affected by the pandemic (Asia in particular) are continuing to grow. There are therefore significant disparities between countries and between sectors of economic activity. The current crisis has accelerated a number of major trends, such as increased digitization of the economy, the proliferation of zombie companies, and decarbonisation of the economy.

In this uncertain context, Coface’s strategy – based on excellence in trade credit insurance, the development of adjacent activities, and agility – is thus fully relevant. Moreover, Coface will continue to work with governments, who have set up dedicated schemes for credit insurance in order to maintain supplier credit to the best possible extent. Coface has signed, where relevant, extensions to the schemes launched in 2020.