“Low-flation” in France, the sign of a change in pace of growth

In a context of slow inflation (“low-flation”) and flat growth, France is in danger of not being able to escape the vicious circle of falling prices. Is it possible that France, without going to the extremes of the deep depression of the 1930s in the United States and a number of European countries, could experience a lengthy period of price and growth stagnation, such as happened in Japan between 1990 and 2010? And if so, what would it mean for the French economy and its companies?

20 years of “low-flation” in Japan, what lessons can we learn?

Japan went through a 20 year period of “low-flation”: between 1990 and 2010, with average growth of +1% and inflation at +0.3%. With its economy overheating as of the 1980s following its opening up, Japan suffered a first wave of insolvencies at the beginning of the 1990s. Many of its companies, with low profitability, high debt levels and overcapacity, suffered when the banks tightened their lending terms as they themselves were being undermined by runaway inflation, followed by deflation. After a brief respite in 1997, a year in which prices again started to rise thanks to an increase in VAT rates, the period of “low-flation” took over once again until 2010, with a new peak in binsolvencies in 2001, triggered by a restructuring of the banks.
There were a number of factors behind this long period of price stagnation. First of all, the consolidation of the banking system was delayed for too long. Secondly, the “zero rate” policy of the Bank of Japan did not work, with the plentiful money supply failing to have a positive impact on the real economy. Finally, as real growth in the Japanese economy was below its potential growth rate during this period, unused production capacity drove prices down.

Whilst the risk of severe deflation is unlikely, that of a prolonged period of “Japanese style low-flation” is real

There are a number of reasons to believe that France should be capable of avoiding real deflation. The relative resilience of wages is one. The ready availability of cheap liquidity and an innovative central bank that is active in guaranteeing the financial stability of the market are also factors in supporting prices. This was something that was desperately missing in the 1930s, and that should enable the Eurozone to avoid the deflationary trap.
However, the probability of going through an extended period of “low-flation” and weak growth as happened in Japan as of 1990s seems more likely. Both growth and inflation have in fact been following a downwards path since 2011. Based on the forecasts from Coface, GDP growth is unlikely to exceed 0.4% in 2014 and 0.8% in 2015, levels that are significantly below the level of 2011 (2.1%). Similarly, consumer prices have increased by just 0.5% on a year (to the end of October 2014) and inflation will run at an average of 0.7% in 2015, compared with 2.3% in 2011. The risk however does need to be placed in its current context. The French banking sector today is in much better health than that of the Japanese banks in the 1990s. And the scale of the excesses of the French property sector is well below that of the sector in Japan at the time.

What are the risks and opportunities for French companies ?

As in Japan in the 1990s, “low-flation” in France is an indirect consequence of the crisis.
This simultaneous decline in growth and in inflation is mainly the result of weak demand, something that is a normal occurrence in periods following a crisis, or crises. The existence of overcapacity (the production capacity utilisation rate is still below its average prior to the crisis) means that many industrial sectors are especially vulnerable to any slowing in inflation. In these situations companies tend to prefer to build their cash balances and reduce debt rather than invest, which is counterproductive for their medium-term growth prospects.
In the shorter term however, “low-flation” does have certain benefits for the French economy. First of all, it boosts household purchasing power and therefore consumption, which is still the key driving force for economic growth. In terms of companies, other than the resulting favourable financing terms thanks to low interest rates, the reduction in production costs arising specifically from the decline in oil prices has a positive impact on their margins. Unsurprisingly, the main beneficiaries of the recent collapse in world oil prices have been the chemical and transport sectors.
Beyond these short-term effects, a prolonged period of “low-flation” is a sign of a change in the pace of growth: lower growth, lower inflation, but also of more favourable financing terms and a slower increase in production costs for companies. 2014 has confirmed it: whilst GDP growth in excess of 1.6% has been historically necessary for there to be a decline in the number of company insolvencies in France, this number has stabilised (and a small fall of -1.2% is even expected for 2014 as a whole compared with 2013), despite GDP growth of only 0.4%. 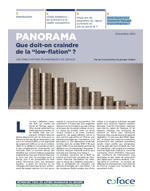 Download this press release : “Low-flation” in France, the sign of a change in pace of growth (161.85 kB)