Unless otherwise stated, changes are in comparison with 9M-2016
1 Constant perimeter = excluding State Export Guarantees Management (€40.1m revenue in 9M-2016).
Coface ceded this activity as of January 1st 2017; 2016 figures impacted by this activity have been restated so as to be comparable to 2017
2 Comparable basis = at constat perimeter and exchange rates

“We now see the full impact of the measures taken in the previous quarters within the Fit to Win strategic plan to drive down the loss ratio, in what is a still favourable economic environment. The net profit for the quarter, at €35m, shows significant progress compared to previous quarters. These improved results provide a strong base to build on for the future. Going forward, Coface will continue to drive quality of service, a cornerstone of long term value creation, and invest in its digital capabilities.This will be underpinned by the ongoing transformation of the company’s culture around its core values: client focus, expertise, collaboration, courage & accountabiity.”

The Board of Directors of COFACE SA examined the summary consolidated financial statements for the first nine months 2017 during its meeting on October 25th 2017. They were subject to review by the Audit Committee. 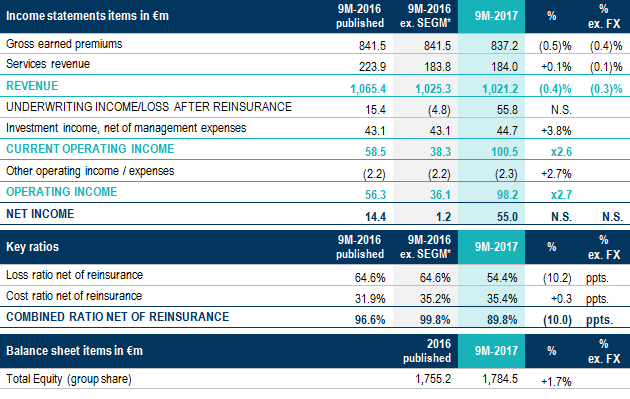 At 30 September 2017, the total turnover for the Coface Group reached €1,021.2m, down (0.3)% at constant FX and perimeter1  vs. 9M-2016. These figures have been adjusted for the transfer of the French State Export Guarantees Management which took place at the end of 2016.

Revenue up +0.2% at constant FX and perimeter1 in Q3-2017 was helped by increasing client activity in all markets and growth from other activities (Factoring and Services).

In Western Europe turnover grew by +1.8% and by +3.2% at constant FX1 compared with 9M-2016, thanks to improved new business trends, with a positive contribution from both Single Risk and Trade Credit Insurance.

In North America turnover was down by (11.3)% and by (11.8)% at constant FX, as the previous year benefited from several non-repeated deals. The Group also cancelled unprofitable contracts in Canada.

In Central and Eastern Europe turnover was up +2.7% and +0.8% at constant FX. Growth in the region was offset by one-time prior year premium adjustments in Poland and renewed price decline in Austria.

In the Mediterranean & Africa region, turnover grew by +5.3% and by +5.6% % at constant FX thanks to the continued good commercial momentum, driven by Italy and Spain.

Trends in emerging markets remained unchanged, with varying performances. In Latin America, turnover grew by +4.0% (and by +2.7% at constant FX), driven by a good performance in Argentina, offset by higher attrition in Brazil and Mexico. Asia continued to suffer from the effects of risk action plans and declined (10.0)% and (10.1)% at constant FX.

Key commercial performance indicators followed the trend seen in previous periods. Premium volumes for the first nine months remained supportive and benefited from an upturn in client activity of +3.3%. The client retention rate rose to 90.3% (vs. 88.6% in 9M-2016), while price evolution remained negative at (1.4)%, but was slightly better in comparison with previous periods.

In Q3-2017, the loss ratio before reinsurance was 43.0%, showing an improvement of 11.2 points compared with Q2-2017. This sharp improvement was driven mainly by Asia and North America. Asia registered its lowest gross loss ratio for the past year at 38.7% in Q3-2017. North America registered a gross loss ratio of 15.9% this quarter, benefiting from prior year reserves. This was partially offset by the normalization of the loss ratio in Western Europe, which nonetheless stands at a very good level of 44.4% in Q3-2017.

The Group’s net loss ratio for 9M-2017, at 54.4%, was down 10.2 points compared with 9M-2016. This is due to higher than expected recoveries on prior underwriting years, a decrease in both average costs and frequency of claims, and an overall supportive economic environment.

Coface continues to execute its operational efficiency programme. Cost savings achieved over 9M-2017 amounted to €11.8m, ahead of schedule. These savings offset the €10.8m long-term strategic investments made over the 9M-2017 period. The evolution in internal costs is mainly driven by inflation and a one-off fiscal charge of €6m (Italy) registered in the course of Q2-2017.

The net financial income stood at €44.7m as of 30 september 2017. Portfolio management generated net capital gains of €8.6m in 9M-2017. As in H1-2017, the FX impact includes the compensation for the one incurred in the technical result. Cumulatively over 9M-2017 the contribution of FX (net foreign exchange gains/losses) was positive by €5.8m vs. a €(2.2)m negative contribution three months ago. The environment remains characterised by historically low interest rates. In this context, Coface limited the decline in its portfolio yield, which stood at €30.8m for the period (versus €31.9m in 9M-2016).The accounting yield[2], excluding capital gains, was 1.2% for 9M-2017 vs. 1.3% for 9M-2016.

The Group’s RoATE reached 4.7% yeartodate as a consequence of the improvement in the technical result.

Coface’s strategic plan,Fit to Win,is progressing well and the impact of its initiatives are now visible. Guidance for the H2-2017 net loss ratio was recently improved to below 50%. Results for Q3-2017 fully support this target.

The ~83% combined ratio across the cycle target is confirmed.

The Group has already achieved €11.8m cost savings, ahead of schedule. This enables the Group to anticipate reaching €15m cost savings in 2017 and to affirm its target of €30m for 2018.

Coface confirms the €30m investment for the period 2017-2019. Restructuring expenses will be lower than previously anticipated, allowing to accelerate its digital transformation.

The presentation will be available at the following address: http://www.coface.com/Investors/Financial-reporting 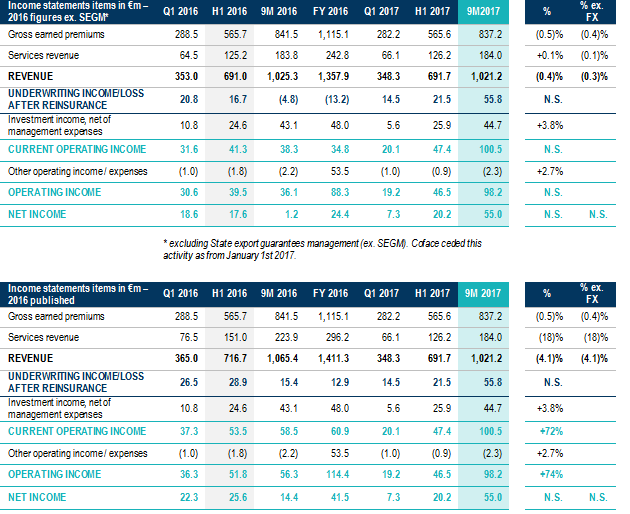